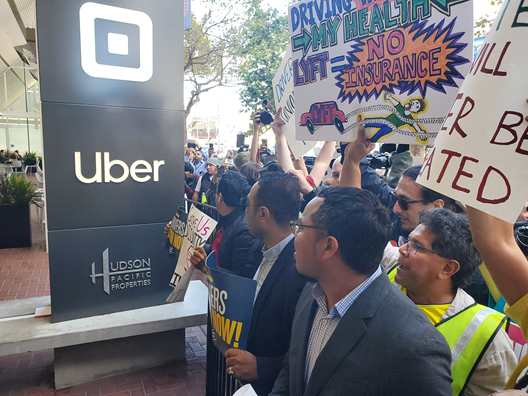 JwJ is working with Gig Workers Rising, We Drive Progress and other unions and worker centers to drive innovative organizing and policy to address new forms of worker exploitation in the “gig” economy. We’ve been relentless in our fight against billion dollar app-based companies to ensure basic rights for app workers.

In 2019, we organized a hearing at the San Francisco Board of Supervisors where a hundred workers spoke out, and passed a unanimous Board resolution in support of Assembly Bill 5 and gig worker rights. AB 5 passed last year, supporting basic rights like minimum wage and overtime for millions of California workers.

When the pandemic hit, we helped pass an ordinance protecting health and safety for app-based delivery drivers and the public they serve. Our work continues to enforce those gains, and to raise labor standards and expand organizing.

Currently, we are fighting to protect workers and basic protections like paid sick leave, workers compensation and unemployment insurance. App companies have spent almost $200 million on Prop 22, the most in any state ballot campaign ever, in an attempt by app companies to buy themselves a special exemption to state law and preempt local progressive laws.